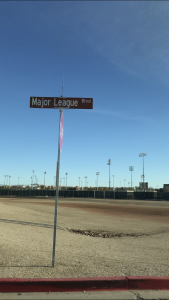 I couldn’t sleep the night we arrived in Phoenix. Still a little tense from the flight and all the logistics of rental cars and getting to the hotel, I was also just overwhelmed.

By how all this came together.

By getting to be there with my son.

By what I was about to be involved with.

The next morning came quickly, as 5 AM usually does. Surprisingly, I awoke refreshed, despite the lack of sleep. God is good. I called Mintzy to talk me through directions to the team parking lot, turned onto Major League Boulevard, waved to the security guard, parked the car, hugged Steve, and never really caught my breath.

As the room began to fill with a couple dozen coaches, I was introduced quickly to each one, some of whom I had communicated with during last year’s study. What a blessing to put a face with a name. Representing every level of the organization, these guys sat together on equal ground as they waited for Mintzy to start the day’s study. In that room, there was no one above another. In that room, there were just men seeking to hear from and know the Lord.

Aaron, the brother of Moses, was the focus of the day from Diamond Devotions, Volume 4. As Moses met with God on the mountain, Aaron was left in charge of an increasingly restless Israelite people. Wilting under the unrelenting pressure to conduct a worship service, Aaron caved and formed a golden calf for the nation to honor. “This is your god.” Oh, boy. Quickly, God dispatched Moses down the mountain to handle the situation. Imagine that conversation for a moment. “Aaron, what in the world are you doing?” “……” What could he say? Aaron just had the worst moment of his life. He led the people into idolatry and was now facing the certain wrath of God.

But that’s not the end of the story. Interceding on behalf of his brother and the entire nation, Moses stood before the Lord asking for mercy. Aaron was not to be defined by his worst moment, but by the grace and mercy of God. Instead of the immediate destruction, Aaron received redemption and later became the first high priest. Don’t miss that. The man whose worst moment deserved the full wrath of God was overwhelmed by the full redemption of God.

That’s what we talked about that morning. Your worst moment doesn’t define you. But not because you can make up for it. Instead, it’s because the cross of Jesus—the full grace and mercy of God—defines you. No, you can’t make up for it. Yes, you deserve shame and punishment. “But God demonstrated his love toward us in that, while we were still sinners, Christ died for us” (Romans 5:8).

By your worst moment.

Or by the cross of Christ.

Let God overwhelm you with that second one.