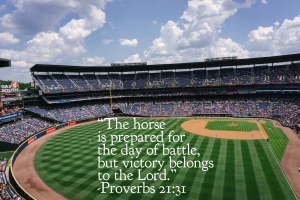 Before every series and every game, coaches from high school to the pros do all they can to prepare their teams for competition. Without physical and mental preparation, a team stands at a serious disadvantage. Extra BP and ground balls are taken, team defense is emphasized, pitchers are told how to attack hitters, the scouting report is discussed in detail.

Then the game begins and it’s completely out of the coach’s hands. The coach can prepare for the game, but the players must play it. Victory or defeat belongs in their hands, ultimately.

Proverbs 21:31 talks about the battles we face in life–“The horse is prepared for the day of battle, but victory belongs to the Lord.”

We can, and should, prepare for whatever life might throw at us, but victory isn’t in our hands. It’s in the Lord’s.

What does this teach us?

Be prepared. Doing nothing in life and then counting on God to overcome our laziness and stupidity is lazy and stupid. The Scripture never says don’t prepare for what might happen in life, but only that our preparation should ultimately lead us to trust God for victory.

Be poised. Don’t be surprised when the battle starts. It can’t exactly be put on the scheduled like an upcoming game, but we know it will happen. Something will go wrong in our lives, on and off the field. It’s in those moments when our poise–our composure–will be tested.

Be patient. Victory sometimes comes in the bottom of the 9th. And so it is with life. God does not operate on our timetable. Instead, he often teaches us patience by letting us deal with some of the difficult parts of the battle. Even so, victory is assured for the followers of Jesus (read Revelation), so be patient to see God come through in the end.

Be prayerful. What does God want us to do while we wait for his victory? Ask him, study his word, prayerfully take each step along the way.

Lord Jesus, prepare me for what lies ahead. Prepare me most to trust you. Amen.