The Cost of Anger 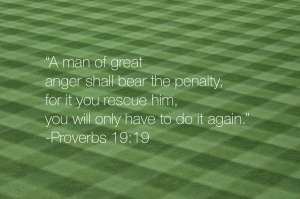 Baseball players and managers are notorious for their tempers. It’s always somewhat entertaining to watch the old videos of players taking out frustrations on dugout coolers, phones, and bat racks. Likewise, manager/umpire arguments throughout history have created some memorable moments.

In one sense, there is a playfulness in such angry outbursts, something that can be laughed at later.

Not all anger, however, is the same. In fact, most is not.

Proverbs 19:19 gives God’s thoughts on the matter—“A man of great anger shall bear the penalty, for if you rescue him, you will only have to do it again.”

“A man of great anger…” Someone who is known for it, relishes in it, and cannot or won’t control it. Volatile, explosive, unpredictable.

“Shall bear the penalty…” There is always a penalty for great anger. Only Jesus got angry and didn’t sin. Usually, we are quite the opposite; our anger is laced with sinful thoughts, words, and actions.

Sometimes, it’s a loss of reputation. Instead of being known for his ability on the field or his capacity for leading others, the player or coach of great anger is known only for that.

Sometimes, it’s a loss of relationships. It’s impossible to maintain long-term, healthy relationships when a person is full of rage.

“If you rescue him, you will only have to do it again.” What do you do with a person of great anger?

Realize you can’t control them. If theirs is a life without self-control, no one else can do it for them.

Recognize the danger involved. Anger, if not controlled by the Holy Spirit, will damage everyone around that player or coach.

Release them to the Lord. Despite how much you want to help, only the Lord can change this player or coach’s heart, thus changing his anger.

Lord Jesus, take my anger. Replace it with your love and grace. Give me wisdom when dealing with people of anger. Amen.