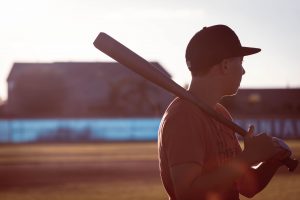 I couldn’t get that at-bat over fast enough.

I’m not ashamed to say I was scared.

Fear is part of the human experience for now. Over and over in the Bible, God’s words to his servants began with “Don’t be afraid.” So many times, his people feared so many things.

Feeling all alone in that batter’s box, I feared a fastball to my head.

Feeling all alone in life, we fear failure, isolation, disappointment, shame, humiliation, exposure, punishment, death, and a host of other things.

But what if we don’t have to be afraid? What if the very real fears we feel have an answer? What if there’s someone whose presence in our lives overcomes our fears?

When an angel appeared to a carpenter in Nazareth in Matthew 1, fear was the natural result. After all, when God sends a messenger, it’s not always good news. Gabriel’s words to Joseph: Don’t be afraid. God is coming, but for deliverance instead of destruction. His nickname is Emmanuel–God is with us.

Joseph was never the same. All his natural fears were overcome with supernatural power. He didn’t suddenly become strong, but was given strength he could never manufacture. Because Jesus would be with him, his fears had an answer, a solution, a place to land and be dealt with.

If you’re experiencing an uncomfortable–or terrifying–at-bat in life right now, it’s ok to be scared. That’s part of our current human experience. But so is Jesus, the one who takes away our fears and replaced them with a faith and peace that are beyond explanation.

He is with us. Get back in the box.

Lord Jesus, thank you for your presence in my life. Help me to trust you, even when I’m scared to death. Amen.