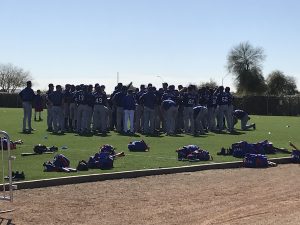 He made no attempt to ‘wow’ them with his introductory speech. It was largely unimpressive to those who heard it. A few minutes before, the press conference highlighted his track record and character. As a result, the players expected something overwhelming from their new coach. Instead, he simply went over the first week’s practice plan.

You get one opportunity to introduce yourself to your new players and you go over a practice plan?

Little did they know that this simple practice plan was the key to everything the coach would be about in the next few years.

Little did they know how profound that introduction was.

Little did they know how much they would benefit from his simple plan, his consistent approach, and his high expectations.

In Matthew 1, the New Testament opens in similar fashion. Instead of starting with the description of Jesus healing the sick or raising the dead, God inspired Matthew to write a genealogy. That’s right, a list of whose dad was who.

You get one chance to introduce the Son of God to the world through writing and you start with a family tree?

Yep. If you’re God, you do. Because you know what we need to understand.

It was in that family tree that God revealed so much about who he is, who Jesus is, and what the Father would do through the Son.

Maybe that’s why he starts by showing how history had been marching all along toward the birth of Jesus.

Maybe we should trust him in the ‘boring’ when all we want is the ‘wow.’

Lord Jesus, show me who you are, remind me that you are faithful and haven’t forgotten me, show me your plan. I surrender today. Amen.