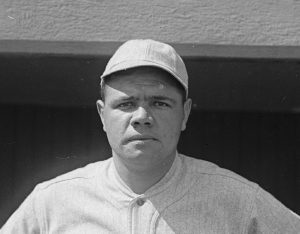 Questions to think about: What are your goals on the field? You’ve thought about them, but what are they, really? What about off the field, as a person, as a Christian, in your relationships, your future work, and so on? Regarding both sets of goals, who’s going to get you there? If you’re answer includes only you, odds are your goals will never become reality.

Babe Ruth is undeniably one of the greatest baseball players in history. In fact, he fundamentally changed the game during the 1920s as he launched more home runs than anyone had ever seen or even considered were possible. Ruth was a great individual talent, to be sure. What’s equally impressive is the number of runs he drove in during the peak of his career. From 1919-1933, Ruth had at least 100 RBI each season. While most casual observers would credit Ruth with this incredible streak, they easily overlook the team contribution to this feat. Even as he blasted home runs at an unprecedented rate, Ruth would not have led the lead in RBI multiple times if not for the hitters in front of him being on base. Home runs are an individual statistic, but RBIs are not. For Ruth to win games, he needed help.

Psalm 1 highlights the importance of who surrounds us in life. Just like great offenses depend on the entire lineup, our lives are often guided by those with whom we spend the most time and from whom we receive the most guidance. This psalm calls us to choose our teammates wisely. Check out what it says specifically:

Never take advice from those who aren’t walking with God.

Don’t hang out too long with those who think sin isn’t a big deal.

Avoid those who reject the wisdom of God.

Learn to love the word of God.

Fill your mind with it.

Get around people who do the same.

Then, as verse 3 says, you’ll ‘bear fruit’ in each season, just like Ruth drove in those runs each year. In the end, you will be made better, stronger, and more able to handle life…all because you had the right teammates and pursued the word of the Lord.

Ruth’s RBI streak is impressive. Living with godly wisdom each day and year is even more so.

Keeping the Streak Going: What will you do today to get into God’s word and be around people who will help you grow as a believer?