I Had To Be There 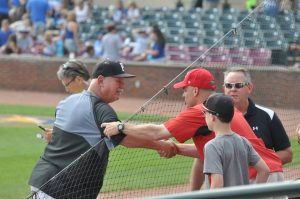 I had to be there. There was nowhere else I would rather be. I knew it would be the last game he coached. I didn’t want it to be, but I knew it.

So I got my son up before dawn and drove to Lexington to catch the late morning 2017 Kentucky State Championship game. He slept. I drove and reflected.

I could relate to either outcome that day, win or lose. I had done both in the championship game, losing as sophomore, winning as a junior and senior. I thought about how I must have been one of a handful of players in Kentucky history to start in three consecutive final games. I thought about how devastated I was to lose, how exhilarating and relieving it was to win.

I thought about Coach. Not Bill Miller. Not even Coach Miller. Just Coach. Every other coach in my life had something added, his last name. Not Coach. He earned the one title no one else will ever receive. Coach. That was him.

I thought about this man who bore such great responsibility for who I had become. Time and distance had only deepened my appreciation for him and for it all.

I thought about all the time, hard work, boredom, all that went into developing a championship program, into making men into boys.

Little did I know as a 14-year-old kid how my life would be changed forever by playing for him.

Dozens of grown men gathered that day for a game they would only watch. They gathered, however, not for a game, but for a man. A man who was their mentor, their leader, their father, their friend, their hero.

It wasn’t about reliving the glory days, but about the glory of the days that shaped our lives.

That was the power of a high school baseball coach to shape a life.

It was about giving our lives to something bigger than us, about being for a time what and who everyone else wanted to be in our town and state. Maybe they wanted the field, the uniforms, the wins we had. I believe, however, they wanted something they couldn’t see, something intangible, something their programs and coaches couldn’t and didn’t provide.

Going to that game was for me, I guess, something I needed to do for myself. But also for Coach. Also for the one I was traveling with, my son, Hank, who would never have the experienced I had. But mostly for me.

I drove that day to see my dad, to see my teammates, to sit with my son and watch a championship game. To show my son where I came from.

I drove that day to shake Coach’s hand. To look him in the eyes and tell him I loved him. To cheer him on, win or lose. To see his last game. To be there at the end.

I had to shake his hand, give him a hug, talk to him one last time, do whatever I could to serve this man who had served me for so many years. With friends and family, I mourned, cried, wondered what the future holds, and said goodbye.

There was nowhere else I wanted to be. To be there at the end. To see Coach through that door. To love him as he loved us…to the end. To celebrate that he had genuine faith in Jesus. To reassure him of who he was in Jesus.

I wish I could say it was all for Coach, but I’d be lying. I needed to be there, to be reminded, to be connected to all of it one more time, to be inspired, to make a sacrifice, to tell him I loved him, to show my son where I came from.

I had to be there because he was always there.

Thank you, Coach. I can’t wait to see you again.