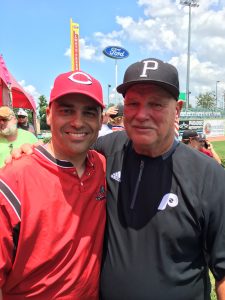 I walked into Pleasure Ridge Park High School for the first time in the summer of 1991. Selecting a high school, I knew even at that time, was a monumental and potentially life-altering decision. I had played for only one coach for as long as I could remember–my dad–and the prospect of playing for someone else brought trepidation, to say the least. Add to that the fact that I knew high school baseball was far beyond anything I had yet experienced.

Beyond those concerns lay a greater one.

I visited other schools that summer of ’92. I toured, walked the halls, talked with the guidance counselors, looked at the baseball fields. Like many other players, one of my long term goals was to play in college, but the immediate future was staring me in the face, and I didn’t know if I was up to it.

Pleasure Ridge Park Baseball, by the summer of 1991, was already legendary, even to the sheltered kid from Prairie Village. Although I had not followed it as closely as some of my Valley Sports Little League counterparts, nor did I have any relatives who had even attended school there, PRP loomed large on the baseball landscape for me. I had been to the “Panther Baseball Camps” in the summer, doing my best not to look stupid in front of the coaches. I had whispered with everyone else when Coach Bill Miller once showed up at a Prairie Village game to watch his friend’s son play. I had watched some games there, standing in awe at the field, the players, and the whole experience.

PRP Baseball was the Big Leagues in my mind, part legend, part impossible. Coach Miller was a guy who spoke only sparingly and a guy to whom you dared not speak without invitation.  So the prospect of playing there was overwhelming, at best.

That greater concern in the summer of 1991: was I even good enough to play at PRP? The last thing I wanted to do was show up there sporting my Prairie Village All-Star trophy or my Panther Baseball Camp evaluation and subsequently make a fool of myself. The other schools I visited that summer were safe, comfortable, and offered me guaranteed success. PRP was none of those.

My visit there was part token, part pipe dream, really. Yet, there I sat in the counselor’s office, discussing the Advance Program and the new magnet programs and all the rest. My casual mention of potentially trying out for the baseball team brought me face to face with my greatest fear: meeting Coach Miller. Summoned to the office, he soon appeared and filled the doorway, covering me with a shadow of fear and doubt.

I introduced myself as if I had never been to camp, or whispered at Prairie Village, or had never avoided eye contact with him so that I wouldn’t die. He shook my hand, said he knew who I was…none of this alleviating my sudden desire to disappear.

Then he spoke. I expected something along the lines of, “Look kid, I’m sure you’ve been good and Prairie Valley or wherever, but you have no idea what it’s like at PRP. You and I both know you’re better off not wasting your time here.”

Instead, this intimidating man, whose hand had just enveloped and swallowed mine, looked at me and said simply, “Don’t make the wrong decision.”

Thank you, Coach. I am in your debt. I love you.