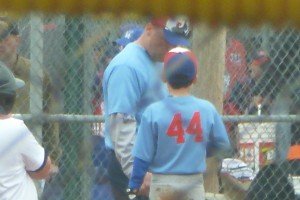 What you would learn about those dads, for better or worse, the sons already know.

The first two words of Proverbs 2:1 tell us about the relationship between the author and his son: “My son…” These are words of love, concern, endearment, compassion, and grace. “My son.” These are the words every son needs to hear, wants to hear, and may seldom hear.

Dad, coach, what’s your approach to your son? If someone watched you at the ballpark, in your home, or wherever, what would they learn? Is your approach one of love, concern, endearment, compassion, and grace?

Consider this and let it change you: those words in Proverbs 2:1 aren’t just from the human author to his biological son. They are also the words of God to you. “My son,” God says, “I created you, I love you, I gave my own Son for you, so that you could be adopted into my family.” What love! What grace! What a Father! Perhaps you need to receive the love of your Heavenly Father and be changed forever today.