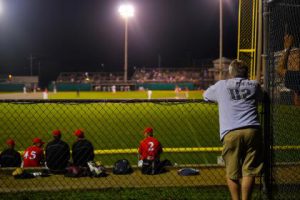 Now his job was on the line. His reputation was at stake. His accomplishments were being overlooked.

Proverbs 24:21-22 talks about this sort of behavior—”My son, fear the Lord and the king; do not associate with those who are given to change; for their calamity will rise suddenly, and who knows the ruin that comes from both of them?”

Why would parents conspire against the coach?

Why would players rebel against their leader?

Why would coaches work against their bosses?

Arrogance, jealousy, discontent, entitlement. Those and other reasons, I suppose.

These verses in Proverbs 24 speak clearly about those who would conspire against the coach, rebel against the leader, or work against the boss. Such behavior is out of line for the people of God.

When the talk begins of taking down the leader, here are a few things to do:

Refuse it. “Do not associate” with it, this scripture says. You might be the only one, but that’s sometimes what is required as a person who follows the Lord.

Refute it. “Fear the Lord and the king” might just mean that you not only refuse to participate in the uprising, but also that you defend the leaders in both word and deed.

Run away from it. “Their calamity will rise suddenly” and you can easily be caught up in it if you allow yourself to indulge in it and not run from it. Distancing yourself from problem people might be your best course of action.

When everyone around you gives in to the mutiny, honor God and refuse it, refute it, run from it.

Lord Jesus, show me how to honor you by honoring those in leadership above me. Amen.