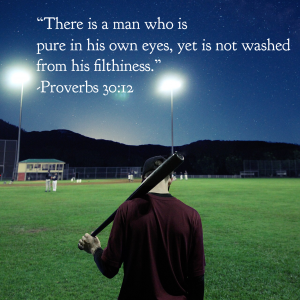 He looked the part. He had the gear, the swagger, the build of a great ballplayer. He wore the uniform well, making sure it was bright white before every game. But then the game started. And he was exposed, badly.

That clean uniform couldn’t cover up the fact that he couldn’t play. In his own mind and in his outward appearance, he was one thing. Reality revealed another.

Proverbs 30:12–“There is a kind who is pure in his own eyes, yet is not washed from his filthiness.”

This chapter of Proverbs is very insightful, describing the kinds of people you can find just by paying attention. Verse 12 highlights the kind who believes himself to be something he is later shown not to be.

Far beyond faking it as a baseball guy, some people attempt to fake their way through life, with people and God.

Sometimes, it’s all they know to do. No one has ever taught them to drop the act and get real before the Lord.

Sometimes, it’s because they are scared to death to drop the act. We fear that God and people will despise us if they really know us.

Sometimes, it’s just easier. We can convince ourselves that everything is ok, that we have it all together, that our lives truly are cleaned up…if we just pretend that all this is so. Because admitting it’s not would be difficult.

But here’s the truth. While we can fool ourselves and other people for a while, we can’t fool God.

The author of this verse isn’t speaking from what he necessarily knows firsthand about everyone, but what is obviously true–that there is a kind of person who pretends to be a follower of the Lord, but is still filthy on the inside.

The truth is that God isn’t impressed with how we clean things up on the outside–he wants to clean us up on the inside.

Today, don’t just put on a clean uniform. Let’s humble ourselves before the Lord and ask him to truly clean us, from the inside out.

Lord Jesus, dig deep and get the stains out of my heart. Amen.