Guys You Can Count On 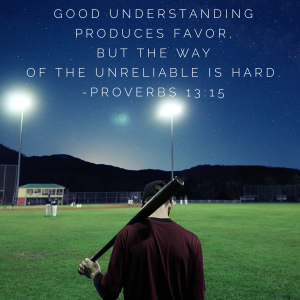 It was part of the speech at the beginning of each season I played and coached for him.

Proverbs 13:15–“Good understanding produces favor, but the way of the treacherous is hard.”

Certain guys who made the team and stuck around four years were a surprise. Others had a little more talent, but couldn’t be counted on. It mattered then. It matters now. You gained favor with that great coach by your understanding of how to live on and off the field. He made life miserable for you if your path was one of treachery (being unreliable).

Who can’t be counted on? Guys with no self-control. Guys who look for ways to avoid accountability. Guys who think their talent is a get-out-of-jail-free card. Guys whose parents never tell them they’re wrong.

The path to being a “count-on” guy is pretty simple in Scripture. The man of faithfulness and reliability becomes so as he builds on the unchanging foundation of God’s word. Know it. Obey it. Live it. That’s what Jesus did. And no one’s ever been more reliable than him. Seems like a good example to follow.

Lord Jesus, I submit myself to you in repentance and faith. Make me a guy who can be counted on. Thanks for your grace when I fail and for always being the one who I can count on. Amen.