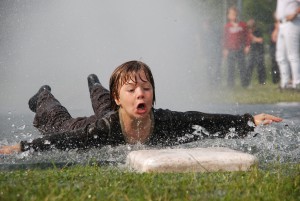 TOOTBLAN. It’s a thing in baseball. Not a good thing. It stands for Thrown Out on the Bases Like a Nincompoop. There’s even a Twitter account dedicated to tracking who racks up the most TOOTBLANs in a season.

You’ve seen a guy get a TOOTBLAN…when he tries to stretch a single into a double and is thrown out by twenty feet; when he trips and falls rounding second and is tagged out while lying on the ground; when he isn’t paying attention and gets picked off by the catcher.

Bad baserunning is inexcusable. Ask any coach. It results from a guy being stupid, clueless, arrogant, or rebellious. There are certain things you just can’t do while running the bases and not wind up with a TOOTBLAN.

Proverbs 6:27-28 highlights a far more devastating TOOTBLAN in life–“Can a man take fire in his bosom, and his clothes not be burned? Or can a man walk on hot coals, and his feet not be scorched?”

Specifically, this is about committing adultery with another man’s wife. Generally, it’s about sexual sin of any kind. And ultimately, it highlights the devastating effects of sin, whatever it may be.

Why would someone believe he could do what God said is forbidden (in this case, sexual activity outside of marriage) and not reap disastrous consequences. This isn’t some Karma thing, as if someone is paid back–good or bad–for what he does. This is simply a natural thing–sin has consequences.

Why, then, do so many wind up with a TOOTBLAN in this area? The same reasons baserunners get them.

Stupidity–we don’t see what’s really going on, nor do we understand the situation we’re putting ourselves in.

Cluelessness–we have never paid attention to what others have done and so we don’t learn the lessons that could prevent disaster in our own lives.

Rebellion–we simply want to do what we want to do, regardless of the consequences.

If you run the bases with stupidity, cluelessness, arrogance, and rebellion, TOOTBLANs will pile up.

If you live with those same characteristics, disaster awaits you down the road.

It’s just the way it is.

Lord Jesus, you are the only one who can save me from my sinful desires and temptations. Live through me. I surrender today. Amen.