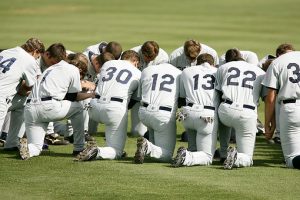 Sometimes a baseball team considers itself more like a family. They can pick on one another individually, but if someone from the outside messes with them, watch out. They rally to one another’s aid with incredible unity and force.

I played for teams like that. We were sometimes merciless with our ridicule of one another, but we were united when it mattered most. Those kinds of relationships are hard to come by.

But, as Proverbs 18:19 shows us, such familial bonds are hard to repair if they are broken–“A brother offended is harder to be won than a strong city, and contentions are like the bars of a castle.”

A brotherly (literal or otherwise) is nearly impossible to repair once broken, much like the difficulty in attacking a fortified city. Why is that?

Our brothers know everything about us. Therefore, they have ammunition that others don’t.

Our brothers can hurt us like no one else. They know exactly what will embarrass us, anger us, and demoralize us.

Our brothers are trusted. We don’t expect them to use what they know about us against us.

Here’s the deal. You and I can’t control what our “brothers” do to us, but we can control a few other things.

We can be a brother to someone else. Loyal. Trusted. Loving. Faithful. Confidential. Helpful.

We can forgive our brothers when they hurt us. The verse above isn’t permission to be unforgiving…it’s just stating the obvious. The example of Jesus on the cross (“Father, forgive them…”) is our model.

We can be reconcilers between brothers. According to the New Testament, we who have received reconciliation with God through Jesus Christ have been given a ministry of reconciliation. We are called to do our part to see people reconciled to God and to one another.

The people on your team, on your coaching staff, in your booster club…they need a brother who will never leave them or forsake them. Perhaps you will be the model that points them to that Brother/Savior in Jesus.

Lord Jesus, show me how to be a brother to the people associated with my team. Make me a witness to the brotherly love you’ve shown me. Amen.