Watching the Field Light Up 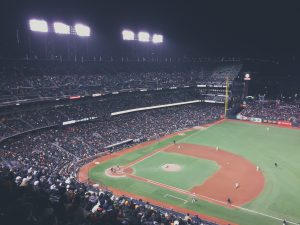 If you have the chance, get to a field sometime when it’s totally dark outside. There might be the residual glow from the neighborhood, but the field will be mostly in darkness. Then, see if you can throw, hit, and field. At first, it might seem fun to try it, and certainly things will get a little crazy, but all that happens in the end is someone gets hurt.

Now, turn on the lights. They’ll take some time to warm up, so watch as they slowly illuminate the outlines of the backstop, dugouts, and outfield fence, then as they show the contour and texture of the infield dirt and outfield grass. It’s amazing to watch. Gradually, you can see what you could obviously never see in the dark. Things that you didn’t know where there can now be avoided so they don’t cause injury. Now you can see the ball, where once you had to guess where it was going.

Proverbs 4:18-19 puts this illustration in terms of life: “…the path of the righteous is like the light of dawn, that shines brighter and brighter until the full day. The way of the wicked is like darkness; they do not know over what they stumble.”

Two types of outcomes are described, increasing light and remaining darkness. By the increasing light of an ongoing relationship with Jesus, my path gradually becomes clearer and clearer, just like the field does when the lights warm up. By the remaining darkness, my path is filled with obstacles I don’t recognize and don’t see as dangerous, even when I trip over them.

In the Sermon on the Mount, Jesus alluded to the truth of this proverb when he spoke of the two paths we are faced with in life. We can walk the narrow path or the wide one. One (narrow) is based on faith in and obedience to Jesus and leads to life (now and forever). The other (wide) is based on self and worldly outlooks that lead to destruction (if not now, then forever).

Ultimately, we are faced with a choice. Walk with Jesus or reject him. Play ball in the light or in the dark. It might seem obvious in baseball, but it’s a tougher decision in life. My prayer is that you will choose light and life, the narrow way, instead of darkness and destruction, the wide way.

Lord Jesus, the darkness is so tempting, looks like so much fun, and is filled with so many of my friends. But I choose you. I choose light. I choose life. Even though it is a narrow way and the companions are few, I choose your path. Amen.