Who Will You Have When It All Falls Apart? 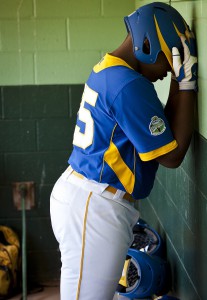 His parents did all they could for him. No, they weren’t perfect. Yes, they made plenty of mistakes. But they did their best to follow the Lord and lead their son down the right path. He was having none of it.

He thought they were too restrictive, too old-fashioned, too religious, too hard on him, too clueless about life as it really is. Some of that was his youthful arrogance, but some of it took root in his heart and grew into resentment toward his parents.

He let them know how he felt. He let his teammates and coaches know what a rotten experience he thought his parents were giving him. He wished for a different set of parents, the kind that wouldn’t tell him what to do or try to correct him when they thought he was out of life.

Over time, the more he distanced himself from his parents, the more he seemed to enjoy it. He did his own thing while playing ball in high school and college, then started a new life in a different town, caring little for what his parents thought at this point.

He met a girl, got married, told her all about how terrible his parents were.

Then, his world fell apart. His disdain for authority caught up with him at work. What once was a desired renegade spirit became something his boss thought was just disrespect. One day, it was too much, and he was fired. His wife had all she could take, too, since he didn’t much care for her desires to settle him down, either. She began a relationship with a coworker who showed her real affection. The day after he was fired, she told him about the affair and filed for divorce.

Proverbs 20:20–“He who curses his father or his mother, his lamp will go out in the time of darkness.”

There’s no good ending to this story. There’s only the tough lesson: who will be with you when it all falls apart? If you’ve “cursed” those who care deeply for you, disdaining their love, writing it off as too restricting for the life you want to live, you’ll likely have no one who simply loves you because you exist. And those are the people you need when it all falls apart.

Lord Jesus, humble me today. I repent of cursing those who love me, who are in a role of authority over me. Show me how to love them and receive their love, in spite of their imperfections, and in spite of what I don’t appreciate about them.  When it all falls apart, I pray I’ve not cursed those who will love me just because I exist.