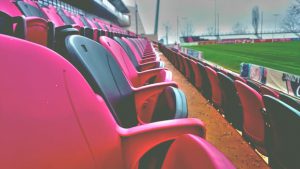 You’ve seen them. Usually, they travel in groups. Some of the guys I played with called them “cleat-chasers.” Apparently, these young ladies liked something about baseball players. Maybe it was the uniform, or the ability to play well, or the tough image some players portray. For whatever reason, at high schools and colleges around the country, young men are followed by young women. It’s just the way it is.

And those young men love it. In fact, they crave it. They aren’t blind to it. On the contrary, they do all they can to make it happen. The attention is intoxicating.

And that’s the danger.

Proverbs 6:25 warns young men in plain terms: “Do not desire her beauty in your heart, nor let her catch you with her eyelids.”

If you read the verses around this, you’ll notice that the woman being warned against is one of low character, one who wants only pleasure for herself, one who isn’t concerned with whatever consequences there may be for her actions.

In fairness, most of the young ladies attending a baseball game aren’t anything like that. Most of them are wonderful.

But some of them are not. And those are the ones being warned against here.

How to spot the wrong kind of girl for you…here are some obvious ways:

She’s committed to someone else. This sounds like a joke, but it’s not. If the young lady who catches your eye (or perhaps the adult lady) is in a relationship with someone else, she’s not for you. And, coaches, if she’s married or you’re married, run.

She’s willing to make changes in her life to win you over. This is a tricky one, but the point is that if her character suddenly changes because she knows that’s what you’re looking for, she might be putting on an act just to win your heart. Be careful. Study her character over a period of time to learn who she really is.

She’s unconcerned about the consequences of her actions with you. She just wants you, no matter who gets hurt (you, your parents, your friends, your team) in the process.

She’s pretty, but that’s it. Proverbs goes on to tell us in chapter 31 that beauty is something that eventually goes away. What’s left then is who she really is. Look for that.

Back to Proverbs 6:25 for one last warning: once your emotions get involved, it’s tough to untangle yourself. “Do not desire her in your heart.” Be sober minded. Ask godly leaders to call you out when you’re heading down a wrong path. Do whatever you must to keep your emotions far from the wrong kind of girl.

Lord Jesus, bring me the woman you want in my life. (For the married guys…keep my eyes and my heart on my wife). Amen.