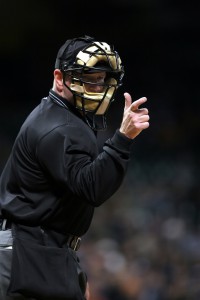 I’m terrible with umpires. I’ll admit it. I like to argue with them. I think they’re wrong and that I’m right. Finding faults with umpires isn’t terribly difficult. There are dozens of calls behind the plate and on the bases each game that can be questioned. There’s just something about me that can’t let those things go. That something, as Proverbs says, is foolishness.

Proverbs 20:3–“Keeping away from strife is an honor for a man, but any fool will quarrel.”

This, of course, isn’t just about arguing with umpires. An argumentative spirit is, in any arena of life, both dishonorable and foolish. What a convicting truth God presents here in Proverbs 20.

I believe there are several reasons why.

Strife, the word used in this verse, can be defined as a general disposition toward or being in an atmosphere of disharmony. Someone who loves strife, who enjoys mixing things up, by default, loves division. God, as Scripture shows us, if not for division, but harmony and unity among his people. Therefore, it is wise and honorable to be a person who strives to be a peacemaker, not an argument-starter.

If you’re looking for it, an argument is always there to be had. “Any fool will quarrel.” Most things we argue about, whether in person or on social media, are useless discussions that produce nothing but greater division. Most of the hills we want to die on aren’t worth it. Most of the calls I argue are just to prove I’m right and the umpire is wrong. Any fool can do that. It takes someone wise to pick battles and leverage an argument toward something that ultimately matters in the long run.

God’s people being simply argumentative is an oxymoron. When he came in human flesh, God in Jesus was certainly dogmatic about the truth and firm on the Scripture, but he wasn’t simply argumentative. He certainly could have been, but he chose not to be. He wisely addressed his critics, gave grace to those in sin, and challenged us all to consider how to bring light to a dark world.

How do we avoid strife and foolish quarrels?

I’ll go back to my problems with umpires for some suggestions in the form of questions:

Does this really matter?

Am I concerned with the mistake of another or just that I appear to be perfect?

Can this be handled without being insulting and irritated?

What will this do to my witness for Jesus?

If I win this argument, what will I have accomplished?

Do I really need to say anything at all?

Am I walking into something for which there is no godly outcome?

Can I be reasonable while making my point, or will I simply become angry and irrational?

Am I willing to walk away, or do I feel like “I have to say something?”

Lord Jesus, fill me with your Spirit so that I will respond to strife and arguments like you did. Amen.