You’re Only Hurting Yourself 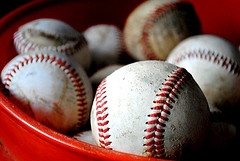 “I’ll show you, Coach,” he thought. “Just keep telling me what I’m doing wrong, what I’m not doing right.” Then and there, he thought he was hurting the coach by his poor attitude, his diminished work ethic, his unwillingness to get on board with the team’s objectives and values. In the process, he became a person of poor attitude, terrible work ethic, and selfishness. He only hurt himself.

Proverbs 8:36 puts it this way: “…he who sins against me injures himself; all those who hate me love death.”

In this short statement, Wisdom speaks volumes. Like the player who decides to shun the wisdom and direction of the coach, the person who lives in direct opposition to the wisdom of God “injures himself.” Whoever looks at the word of God and spurns it, hating wisdom…they “love death.”

You’re only hurting yourself. Going against the wisdom of the Lord might feel liberating for a while. It might feel like you’re really living. But, as a mentor of mine was fond of saying, all you’re doing is sacrificing the permanent at the altar of the immediate. Eventually, it will come crashing down on you, in this life or the next. At that point, you’ll realize just how much a fool’s foolishness injures the fool in the long run. How I wish I had listened more to the wisdom of the Lord at certain points of my life!

At times, the word of God might feel like it’s simply calling you out on what you’re doing wrong and what you’re not doing right. To some degree, that’s the point, since the Scripture illuminates clearly the difference between our sinful hearts and God’s holiness. However, far from being a list of rules to follow and curses to try and avoid, the Scripture not only reveals our sinfulness, but also (praise God!) reveals how our foolish hearts can be made new and wise.

Wisdom is ultimately personified in Jesus himself. He is the way to avoid “injuring” yourself. He is the way to avoid eternal death. The wisest decision isn’t doing better. The wisest decision is to simply submit to the one who did better on your behalf. There’s nothing more liberating than having your heart set free from sin and foolishness, than being changed from death to life.

Lord Jesus, thank you for revealing my sinful heart and for offering an incredible exchange: my sin for your righteousness. Amen.