How to be a Flash in the Pan

Don’t get too excited about youth league legends. You know them well. The kid who is a behemoth 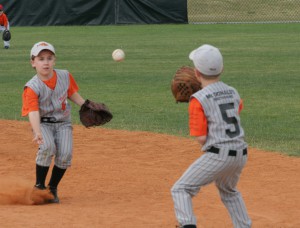 at age 10-12. He throws harder, hits farther, and runs faster than everyone else. His dad is the one everyone looks at with respect and envy. He sets records no one else (until the next freak of nature comes along) will ever break.

Why not get excited? Two reasons, really. First, he hasn’t really done anything yet. Kids who are bigger than everyone else (and at least somewhat skilled) SHOULD dominate at age-specific baseball. Second, there’s still plenty of time for him to be a flash in the pan, leaving everyone to wonder why he’s no good five years from now.

The Bible has plenty of warnings for young people who have a bright future. One is in Proverbs 7:25–“Do not let your heart turn aside to her ways; do not stray into her paths.”

No one wants to be that young man, but we are all (players and coaches alike) prone to wander, just like him.

Here’s how to be a flash in the pan, someone whose success is short-lived.

Assume that success will simply continue to happen, just because you’re bigger, stronger, smarter, or more skilled than everyone NOW. It’s a strong temptation, to believe in early success. I’m urging you, though, don’t buy it. Don’t believe the press clippings. As soon as you believe you’ve got life and baseball figured out, you’ve given into the pride that will be your downfall. Guaranteed.

Avoid correction at all costs. Most folks assume this is just for those who are young players or coaches, but I can assure you it doesn’t necessarily get easier to be corrected as you age. Stubbornness is something that must be broken by the power of God’s Holy Spirit. Teachability comes with humbling ourselves before him, recognizing our flaws and our desperate need for his wisdom. Those who avoid such correction will wonder why they keep making the same mistakes, both on and off the field. Then they’ll wonder why their no good at life and baseball.

Avail yourself to temptation. Proverbs 5-7 highlights the perpetual sexual temptation men and boys face. Countless careers, families, and lives have been forever altered, sometimes irreparably, because of momentary or consistent (and willful) giving into such temptation. Scripture tells us that we cannot play with fire and escape unharmed. It also tells us that the only way to escape temptation is to run from it. Once the lure is followed, and the hook set, it is only a matter of time before we are caught in a trap from which we cannot gain freedom. Guys, run from it. Your career, family, and life depend on it. (Yes, it’s that serious).

I’m praying for you and for me, that we won’t be the proverbial flash in the pan, that our lives will instead be marked by ongoing and ever-increasing maturity and faith, that we will be better men in five years than we are today.

Lord Jesus, make me a man of commitment, vision, and longevity, not one who is a flash in the pan. Grow my faith, help me to desire correction, and enable me to run from temptation. Amen.