Sometimes You Just Get Beat 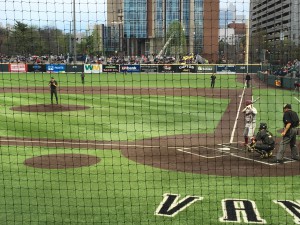 I had a front row seat recently to watch two top-five programs, Vanderbilt and South Carolina, duel it out in Nashville. My son and I watched the second of the three-game series and it lived up to its billing.

Vanderbilt, the 2014 National Champs, sent hard-throwing sophomore Kyle Wright to the mound. Wright lit up the radar gun with his seemingly effortless 95 MPH fastball. It appeared from the outset that Vandy had the upper hand. Wright set down the Gamecocks in order in the top of the first. He was locked in, and it looked like a long night ahead for South Carolina hitters. Wright faltered only briefly in his outing, giving up two earned runs over 7.1 inning.

As good as Wright was for the Commodores, Braden Webb was that much better for South Carolina. Webb, a freshman, dominated from start to finish by changing speed and hitting spots, striking out 11 Vandy hitters, allowing two hits and no runs in eight innings of work. He was incredible and Vandy had no chance.

Think of that. A team ranked in the top 5 nationally had no chance. Webb took a no-hitter into the 6th inning against a lineup full of blue chippers.

Sometimes you just get beat.

Sometimes the other guy is just better than you on a given night.

Sometimes there aren’t any excuses to be found.

Sometimes you just have no answer for what the other team is doing.

Vandy is great. Webb was better.

What will your response be when that happens to you as a player or coach? Excuses? Blaming the umpires? Jealousy? Fighting?

Or, will you suck it up, admit the other guy  was better, get back to work, and go after it again the next day?

(That’s what Vandy did…they won the series the next day).

Great teams, coaches, and players admit when the other guy was better. Then, they turn the page and get back to work.

Sometimes you just get beat, but that doesn’t have to be the end of the story.

And, as a friend reminded me, life imitates the game. Sometimes it doesn’t go your way. But, as the Scripture says, God’s mercies are new every morning and it’s once again the top of the first with no score. Get back at it, trust the Lord, live for his glory, even when you get beat.